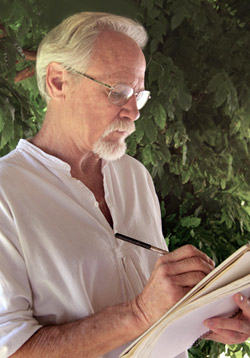 After a long career as a highly successful illustrator and graphic designer, Richard Drayton moved to Sedona, Arizona, and returned to his initial dream of working as a fine artist.  It was a dream that began at the age of seven when his unmistakable gift for drawing and painting was encouraged by his grandmother, an experienced watercolor artist.  She also inspired his love for the natural world, which remains his all-encompassing passion.

As a youngster, Richard spent much time trekking through the unpopulated hills of Orange County, California, drawing and painting landscape and wildlife.  While other boys his age chose sports figures for their heroes, he chose to emulate John James Audubon.  By the age of thirteen, his first painting had been sold.

During the next twenty years, Richard’s career earned him over twenty-five national awards, including the prestigious Belding Award and the coveted First award from The Art Directors Club of New York.  In addition, he is an award-winning signature member of the National Watercolor Society and the Colored Pencil Society of America, as well as winner of the Top 100 Arts For The Parks international competition and numerous other fine arts competitions.

Richard brings to his work a disciplined eye for detail and a brilliant sense of design and color.  He perfected and fine-tuned these qualities during his years as a commercial artist and developed many special techniques in a variety of media, including acrylic on canvas, watercolor, and colored pencil on museum board and lacquered panel.

In his classes and workshops, Richard teaches his students to see depth, perspective, light and dark values, as well as the classical principles of art.  He teaches beyond realism, encouraging his students to combine these timeless principles with 21st century technologies.  Many of his students have gone on to become award-winning artists as well.

Richard Drayton is an award-winning artist, illustrator and advertising designer.